These days I am experimenting with dinner recipes that that are no-fuss, quick to make meals. But the number one thing in my food world is always TASTE and FLAVOUR, so of course it has to be simple yet yummy. Something that can be put together in about an hour (prepping, cooking, roasting) and that stands a chance to passed as a family meal that my kids would eat too.

If you guys are anything like me and you like your food to be  roasty, chewy, crusty, charred and divine tasting, then this roast dinner recipe is for you, my friend. It showcases some simple ingredients that are such a big part of our daily cooking but we just use them as flavour enhancers and have not appreciated them on their own. I am talking about the good old onions and garlic. Just prepping them in a simple way and then letting the oven do its thing on them. The roast garlic gave the dish a surprising pop of flavour and crispiness. Roasting it brought out its sweetness and left it chewy and crisp. The onions were sweetened and charred by the roasting, to the point that where you could  just happily eat the onion wedges along with crisp garlic on its own and go wow!

Anyways, this recipe is about peppers, sausages and potatoes. I had just picked up a few red and yellow peppers from the market that i really wanted to roast. I had also seen Heston Blumenthal do a roast potato recipe that promised perfectly crusty and chewy potato bits, that i really wanted to try. So i got to down to make a Large Roast Dinner featuring those peppers and potatoes and also added charred sausages. It has become a favourite at our place now and some thing that we’ll be making and eating quite often.

I just loved the colours of the peppers so much that I had to do a mini shoot of them, haha. But their sweet taste blew me away even when raw. Roasting made them so soft and even sweeter. They didn’t have the bitterness that comes with the green peppers and their sweet and fresh flavour just sang through the dish.

Someone needs to stop me from rambling on about these peppers so that i can put down the recipe. Here you go:

salt and pepper to taste

Take a large large bowl and put your sliced peppers, onions and garlic in it. Pour a couple of glugs of olive oil, salt and pepper, some thyme leaves and toss everything around till it well coated with oil. Transfer these vegetables into a roasting tin and pop in the oven for about 40 mins or till they are a bit charred on the edges. You may want to stir them a couple of time mid way for even roasting. 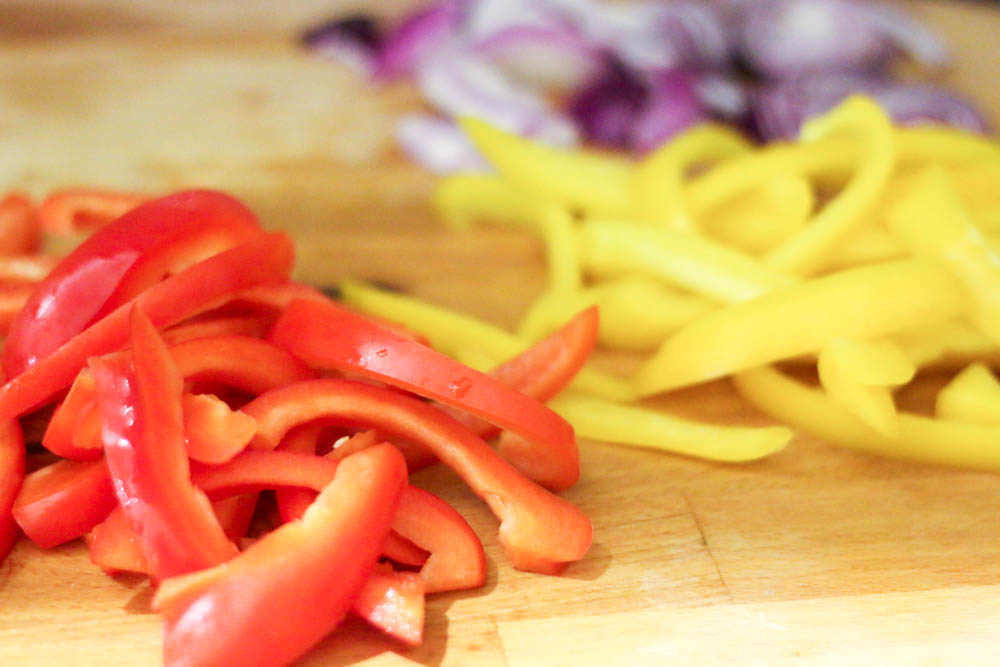 For the Roast Potatoes, fill a separate large roasting tray with olive oil to 5mm high. Place tray into the oven to heat up.

Place prepared potatoes into a bowl under running cold water for 5 minutes to remove all starch from the surface. Place washed potatoes into a large pot and cover with water. Cook on high heat until potatoes just begin to fall apart, about 20 minutes.

Strain potatoes and turn them out onto a wire rack to dry. Once dry, remove preheated roasting tray of oil from the oven and add potatoes and sliced garlic and a bit of thyme, ensuring potatoes are spread out in one layer, flat side facing down. Stir gently to coat with the oil. Return to the oven and roast, turning occasionally until golden and crisp, about 30-35 minutes. Season with salt and pepper.

I used chicken mortadella with red chillies. Mortadella is a large Italian sausage. I sliced it up to about 1/2 inch thickness and 3 inch length. You can use normal sausages too if you like.

Heat some oil on a grill pan to high temperature. Sear the sausages making sure to turn them on all sides to get that charred and grilled look all around. When there is 10 minutes to vegetables, put the seared sausages in that roasting tin along with the vegetables.

To serve, I added the roast potatoes to the sausage and pepper dish and then we feasted on it all to our heart’s content. 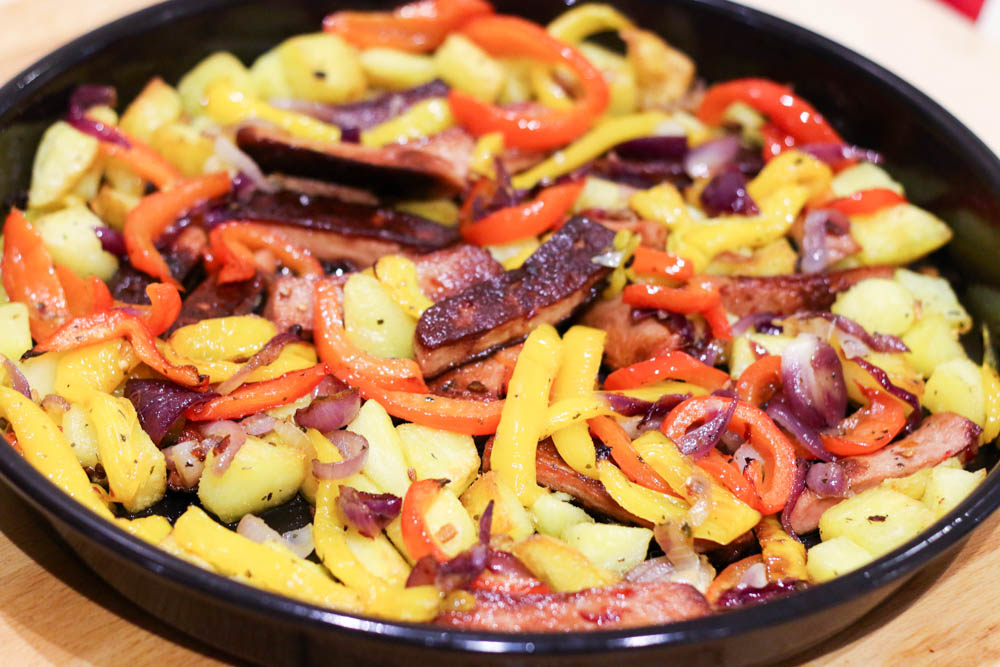 It was a good, hearty, abundant dinner. 🙂